We were on our way on a  very very hungry Sunday afternoon to try some exotic restaurant in Chennai , and on the way we happened to glance at Cream Center in nungambakkam. They didn’t have hordes of people waiting in line which is rare, generally there are long waiting lines on weekends and pronto all plans changed and we immediately parked our vehicles ,got a table as soon as we entered into the restaurant which would have definitely given a high competition to a fish market in terms of the rising decibel 😀 We placed the order asap as we were pretty mesmerized by their Menu and we were all super hungry,our friend who was accompanying us had already had food there a lot many times helped us with the order .We must complement them on bringing all different kinds of cuisines under one banner and giving so much thought to their menu and the mouth watering pictures posted on it. The ambiance though loud is quite spacious and full of light from their huge french windows and pastel hued surroundings.

Worlds Best Nachos : The nachos tasted good and it gets full points for arriving at our table bathed in pool of creamy cheese 🙂 and as much as we totally devoured the food in seconds , to claim it to be “the worlds best nachos” would definitely require more complimenting flavors, as in a small portion of salsa which is traditionally accompanied with nachos, we sort of missed the acidic sourness in between mouthfuls and also the presentation can be made more attractive. After all it is a fine dining restaurant. 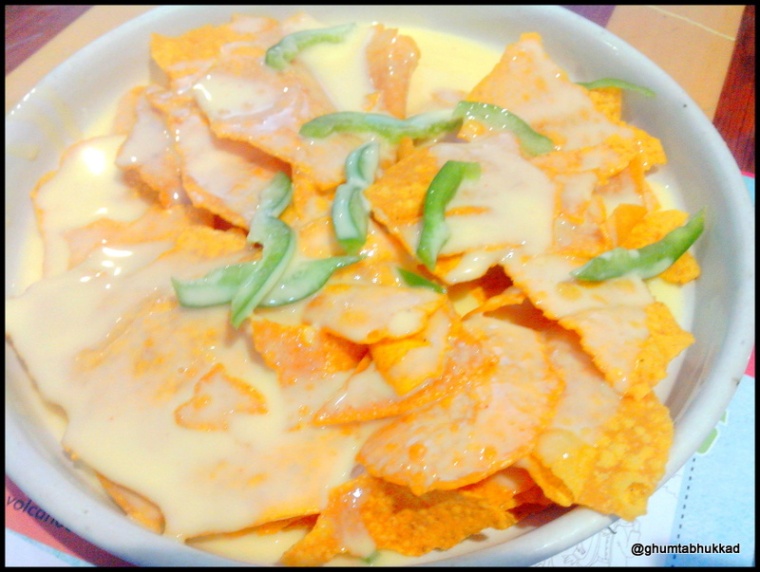 Paneer Ka Baap : Their menu which has enticing food pictures and short descriptions of the food, mentioned that it is a sinful combination served all in one platter :” original Paneer tikka, lal mirch paneer tikka, hariyali paneer tikka, kali mirch paneer tikka and tandoori salad, surely it is the baap of all tikkas”. But then little did we know that they meant that the baap (father) of paneer tikka is aloo (potato)!! As only one piece each of the above mentioned paneer tikkas were given and the other row (as you can see from the picture ) was big chunky cubes of Aloo, which I have to mention here was not cooked properly as it was very hard to cut with a fork ! Most of us left those Aloos on the plate. The taste of the tikkas was better than most places we have tried tandoori versions of paneer, with the paneer being soft and flavorful here, we liked the hariyali paneer tikka best.

Italian Baked Sizzler : This truly was the show stopper for us and the best order of the day. You cannot venture to cream center and not have one of their sizzlers as every few minutes a sizzling aromatic sizzler is flown past the table by one of the waiters. Since we were tasting all sorts of cuisines, Mexican, Indian and all,we decided to go for an Italian sizzler and boy were we happy. The whole combination of red sauce spaghetti and cheesy macaroni, parmesan cream baby potatoes and the bits of grilled and steamed veggies was really good. The taste well balanced.

Penne Arrabiata Double Baked : We ordered this dish owing to it being written in their menu that it is a combination of both herbed italian red tomato sauce and 4 cheese sauce, and also because the picture in the menu looked pretty seductive 😛 The pasta did taste good as the herbs were delicately balanced but we didn’t find any traces of the 4 cheese sauce in it , as the picture below shows there 3 tiny dots of cheese probably used more for presentation than for taste. It tasted very much like a normal arrabiata pasta and we certainly expected more. 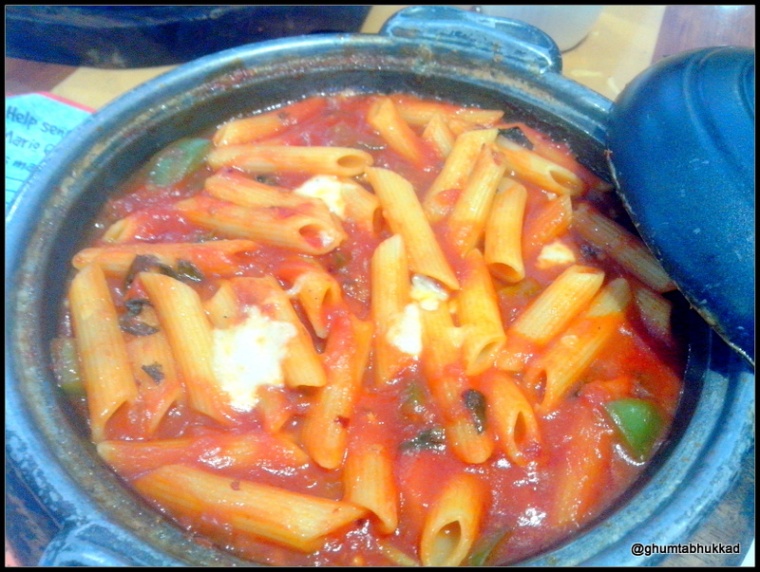 Methi Aloo Parantha : We totally consider it a cardinal sin if parantha does not have a good dollop of butter on top when it comes to the table. Totally unacceptable. We made this order more as an after thought and considering how hungry we were and it seemed like a good small portioned meal combination but honestly the paranthas were lackluster! ( that coming from big fans of piping hot paranthas). The raita was thin in consistency, we prefer it to be a bit thicker and the dal makhani was reasonably good along with it.

To finish off, this is one of the first restaurants that we have mixed feeling about, usually it being a definitely we are going back for more or nope we are never stepping in but here I think we have to be truly seduced or allured by great company to persuade us to try more. Their food certainly tastes good and there is a huge array of dishes to choose from but certain bits lack detailing which should not be ignored amidst a sea of crowd also.

Note : This is not a paid review. It’s based on our experience of going there and we paid for our own meal.